On the morning of Feb. 19, 1945, the 4th and 5th Marine Divisions invaded Iwo Jima after a somewhat ineffective bombardment that lasted 72 hours. The 28th Regiment, 5th Division, was ordered to capture Mount Suribachi. 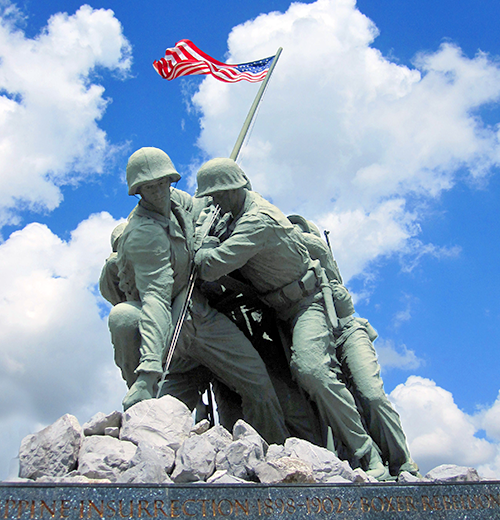 They reached the base of the mountain on the afternoon of Feb. 21, and by nightfall the next day, had almost completely surrounded it. On the morning of Feb. 23, Marines of Company E, 2nd Battalion, started the tortuous climb on the rough terrain to the top. At about 10:30 a.m., men from all over the island were thrilled at the sight of a small American flag flying from atop Mount Suribachi.

That afternoon, when the slopes were clear of enemy resistance, a second larger flag was raised by six Marines:

When the picture was later released, sculptor Dr. Felix W. de Weldon, then on duty with the U.S. Navy, was so moved by the scene that he constructed a scale model within 48 hours, which became the symbol for the 7th and final war bond drive. After the war, Dr. de Weldon felt that the inspiring event should be depicted on a massive scale in our nation’s capital.

He labored for 9.5 years to prepare a working, full-sized model from molding plaster of the survivors of the flag raising (the others having been killed in the later phases of the Iwo Jima battle) posed for the sculptor, who modeled their faces in clay. All available pictures and physical statistics of the three who had given their lives were collected and then used in the modeling of their faces.

Once the statue was completed in plaster, it was carefully disassembled and trucked to Brooklyn, N.Y., for casting in bronze. After the three-year casting process, the bronze parts were trucked to Washington, D.C., for erection at Arlington National Cemetery. The plaster working model was moved to Dr. de Weldon’s summer home and studio in Newport, R.I., for storage.

A Gift to the Marine Military Academy

In October 1981, Dr. de Weldon gifted his original, full-sized working model to Marine Military Academy as an inspiration to our young cadets. Other major factors involved in his site selection included:

The Iwo Jima Monument was dedicated April 16, 1982, on the MMA Parade Ground. 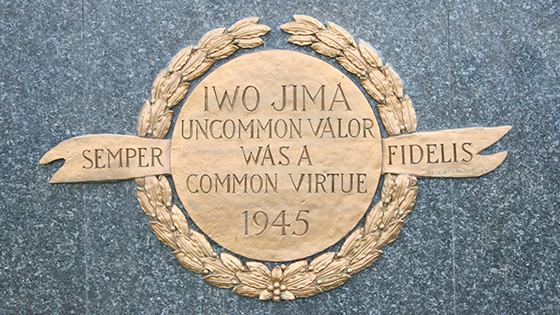 The 32-foot high figures are erecting a 78-foot steel flagpole from which a cloth flag flies 24 hours a day. They occupy the same positions as in Rosenthal’s historic photograph.

The figures, placed on a rock slope, rise about six feet from a 10-foot base. The M-1 rifle and the carbine carried by two of the figures are 16 and 12-feet long, respectively. The canteen would hold 32 quarts of water. The base of the memorial is made of black Brazilian granite. Burnished in gold on the granite are the names and dates of every principal Marine Corps engagement since the founding of the Corps, as well as the inscription, “In honor and in memory of the men of the United States Marine Corps who have given their lives for their country since November 10, 1775.”

No public funds were used on the Iwo Jima Monument project. The entire cost of transporting and erecting the monument was donated by U.S. Marines, former Marines, Marine Corps Reservists, friends of the Marine Corps, members of the Naval Service, MMA trustees, alumni and cadets, and friends of MMA.

Donations in support of the Iwo Jima Monument and the free Iwo Jima Museum are always welcome!