A Sport for Every Interest and Ability

We offer a wide range of sports so that students can participate in a sport that matches there interests. 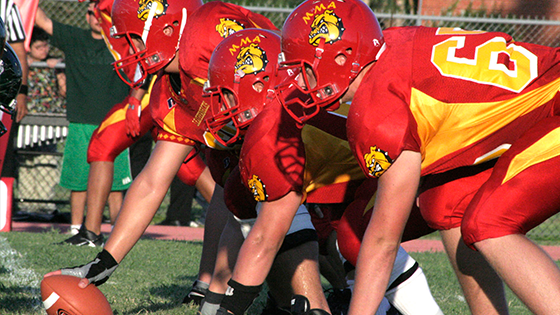 To contact a sport's coach please see the sports listing on our faculty and staff page.

Sports schedules are posted on our calendar page. 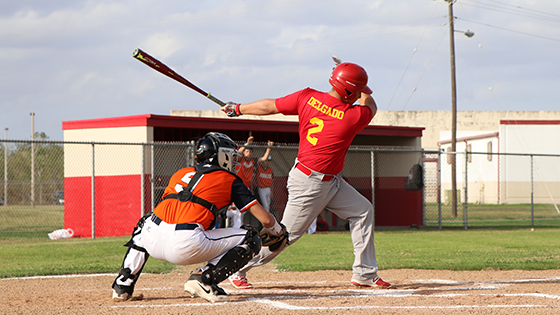 Leatherneck Baseball has competed on the highest levels for nearly 30 years.

Marine Military Academy's baseball season is from January to April. Our Fighting Leathernecks compete against schools ranging from the Rio Grande Valley to Houston. Baseball presents a great environment to teach our cadets team-building and self-discipline — all while enjoying America’s favorite pastime. 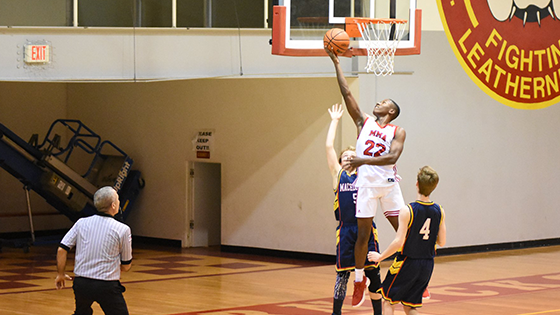 Marine Military Academy's basketball program concentrates on bringing out a focused group effort from every member of the team. Players are expected to maintain the highest physical and mental stamina, allowing every piece to work in concert with the next for team success. Cadets will enjoy the opportunity for individual expression paired with team-building exercises, setting basketball apart like no other sport.

The season kicks off in early November and runs through February. Fighting Leatherneck hoops competes against other Texas teams in the Rio Grande Valley. 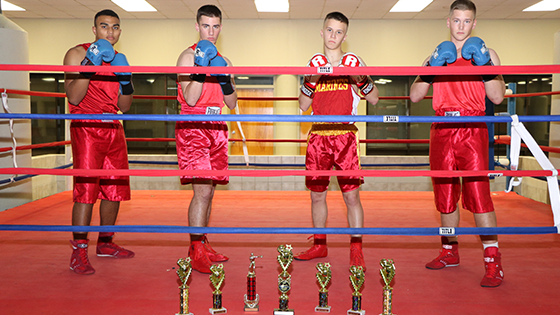 Boxing is one of the most demanding sports offered at Marine Military Academy. Cadets will find themselves in an extremely rigorous training program, challenging their physical and mental limitations.

MMA boxers compete annually in the RGV Golden Gloves Tournament. The MMA boxing team is the only high school team in the nation officially certified by USA Boxing. 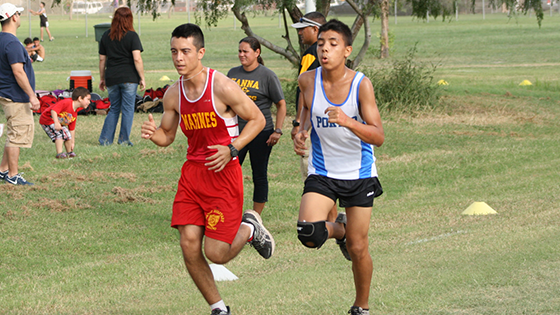 Our practices are physically demanding yet offer athletes the opportunity to truly test their limits physically and mentally. Cadets are required to run three to five miles daily over various terrains, so a high level of self-motivation is needed for an athlete to excel.

The season runs from August until October with runners competing with local high school teams in the Rio Grande Valley. 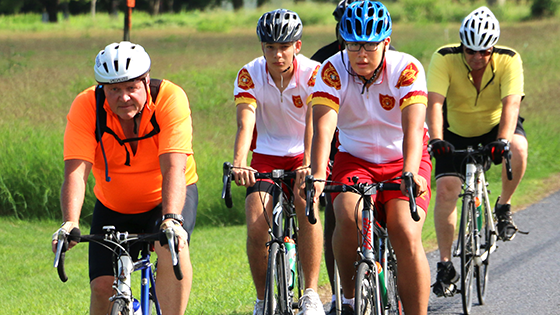 Marine Military Academy’s cycling team is an excellent opportunity for cadets to learn self-sufficiency through individual riding strategy and team-building through group strategy.

Because most of the training takes place away from school, availability to join is limited. The riding season begins in February and continues until the end of the school year. During the season, team members will participate in various rides throughout the region. 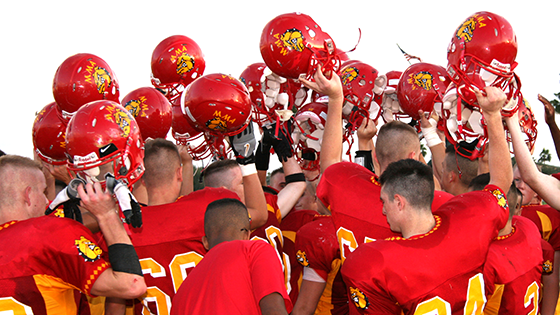 The pride of Marine Military Academy, our Fighting Leathernecks have competed at every level since 1965.

Along the way, our team has won state championships and tallied an undefeated season in its storied history. Many of our athletes have received scholarships to major colleges and universities and, currently, we have five alumni in the National Football League.

Our varsity team consists of players from grades 9-12, with fall practices beginning in early August. 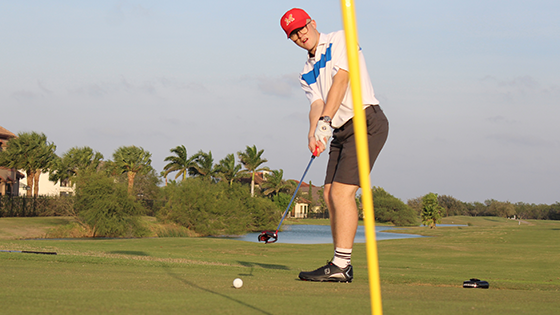 The Marine Military Academy golf program is an excellent learning environment for lessons in life, patience and sport.

Golf has become one of the fastest growing sports among the youth of America, and Marine Military Academy is proud to take part in this growing trend with a program that is both enriching and highly competitive.

The team begins practice during the fall semester, but competition begins in the spring. Our team participates in daily practices at a local golf course and competes against many of the local high schools in varsity and junior-varsity matches. 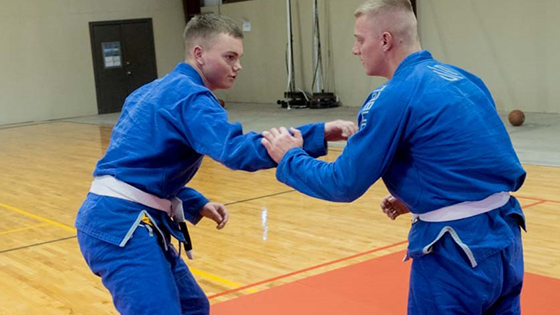 Known as “the gentle art," Jiu Jiu-jitsu is not simply an excellent approach to self-defense, but a method of overall personal improvement. By teaching the negation of any opponent’s natural advantages, this sport also leads to cadets overcoming their fears while dealing with seemingly insurmountable obstacles. Patience and intellect lead to success in jiu Jiu-jitsu. Learning to think their way out of any situation builds a level of self-confidence that cadets will carry with them well into adulthood. 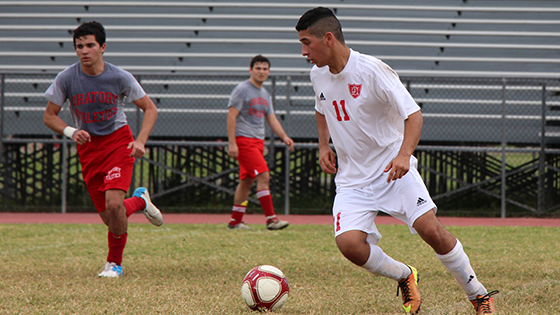 Joining the soccer team at Marine Military Academy is the ultimate way to test your skill and endurance.

MMA soccer runs from late October to mid February. Our varsity players are expected to possess a high level of experience and skill. However, there is a place for any cadet with a love of this sport who wants to develop their skills, promote teamwork and instill a sense of pride in themselves and their teammates. 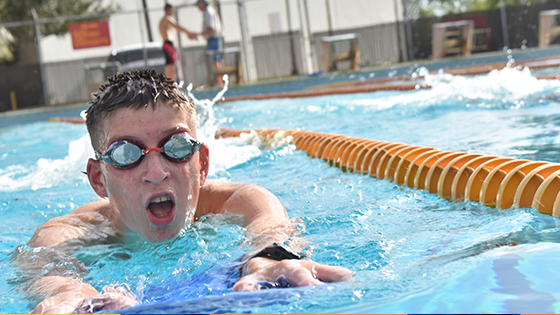 MMA... challenging the mind and body.

Marine Military Academy's swim program strives to achieve excellence through individualized growth and team unity. Our swimmers develop overall fitness and self-discipline to enable them to maximize their potential.

The season runs from September through December.

Practice, practice and more practice will pave the way for your success on the Marine Military Academy tennis team.

Marine Military Academy tennis begins in October and continues through May. All interested athletes are welcome to participate in either the fall or spring semester try-outs.

Every afternoon during activity period, practices are held where players will sharpen their stroke mechanics, perform basic drills and challenge each other during practice matches. The team plays four to six high school tournaments during the season with additional practice matches scheduled against local schools when needed. 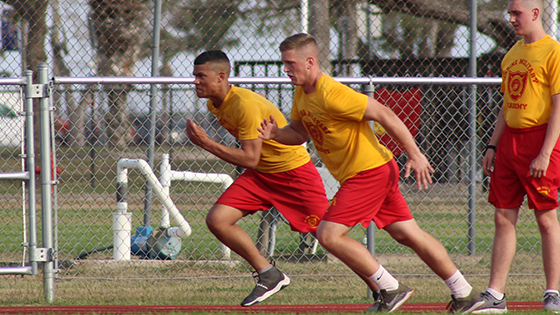 The Marine Military Academy track and field program embodies a tradition of excellence.

The track and field program at MMA is an excellent opportunity for many athletes at our boarding school to showcase their talents. Possessing one of the finest training facilities in South Texas, our athletes are able to hone their skills at any level. Over the course of the program’s history, we’ve produced numerous state champions and successful collegiate athletes.

During the spring semester, cadets compete in a multitude of relays spanning the Rio Grande Valley. 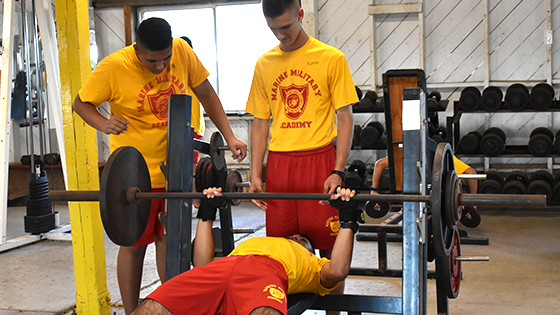 The weightlifting program at Marine Military Academy teaches cadets self-discipline while supplying the fundamentals for a superior physique.

Our strength training techniques will assist athletes in every aspect of their Marine Military Academy experience — whether through daily PT sessions or organized sports. MMA has produced regional, state and national weightlifting champions.

What’s significant about our approach is that it allows your son to work at his own pace, setting personal goals all while being motivated by a supervising drill instructor. Athletes who join this program can expect a rigorous regimen that will develop him physically and mentally, preparing him for an active adulthood.