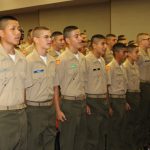 To honor its newest cadets, Marine Military Academy (MMA) held its Introductory Training Graduation on Sept. 14. Sixty new students, also known as “plebes,” officially graduated from their four-week introductory training and became official members of the MMA Corps of Cadets. Parents, siblings, and other family members from across the country and around the world attended this special event. At the Introductory Training Graduation, the plebes took the official oath of an MMA cadet. Then they affixed the Marine Corps insignia … END_OF_DOCUMENT_TOKEN_TO_BE_REPLACED

Cody Hubbard to receive a $1,000 scholarship Senior Cody Hubbard of Stafford, Va., is one of only 10 outstanding students in the lower South Texas region to receive a $1,000 scholarship from KRGV-TV. To be considered for the award, Hubbard had to submit a 300-word essay about himself as well as two letters of recommendation. The station announced the winners on Sept. 9. On Oct. 1, KRGV-TV came to interview the cadet leader. Hubbard hopes to attend the United States Naval … END_OF_DOCUMENT_TOKEN_TO_BE_REPLACED

From Oct. 31 to Nov. 2, parents from all corners of the globe came to Marine Military Academy for Parent’s Weekend. Within those days, MMA hosted several special events to celebrate its 48th anniversary, including a first-class parade and ball. On Thursday, Oct. 31, the MMA Parents Organization hosted the “Night at the Museum” reception in the Iwo Jima Museum & Gift Shop. Dressed for the occasion – in Halloween attire! – the parents enjoyed food and beverages and were able … END_OF_DOCUMENT_TOKEN_TO_BE_REPLACED

Flag retirement ceremony follows the parade More than 170 veterans attended Marine Military Academy’s Veterans Day Parade on Nov. 11. Just as impressive was the number of people – people of all ages – who turned out for the event to pay homage to its nation’s heroes. At the parade, veterans from World War II and the Korean War received special seating directly in front of the historic Iwo Jima Monument. During the parade’s pass in review, all veterans were asked … END_OF_DOCUMENT_TOKEN_TO_BE_REPLACED 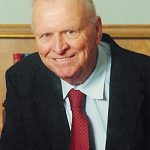 Captain William “Bill” Gary, USMCR (Ret), the founder of MMA died on Jan. 12 at the age of 89 in a Phoenix hospital. A native Texan, Captain Gary was a successful rancher, land developer and home builder who lived near Prescott, Ariz. Above all, however, he was a Marine. Capt Gary’s business savvy coupled with his military leadership led to the opening of MMA in 1965, the first school in the United States based on the values and traditions of the … END_OF_DOCUMENT_TOKEN_TO_BE_REPLACED